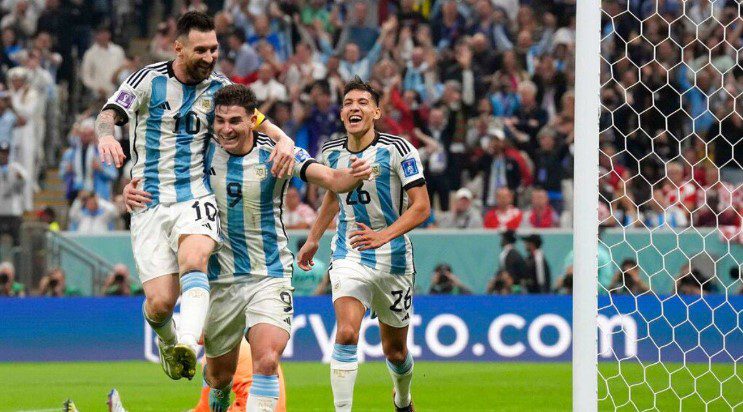 Argentina vs Croatia: The fight was LM10 vs LM10. Lionel Messi vs Luka Modric. The two best footballers of the two teams. Messi defeated Modric in that fight. However, it was Modric who played the best football for Croatia. But in football, goals are everything, and here, Messi scored. Argentina reached the World Cup final by defeating Croatia 3-0. Messi scored the team’s first goal from the penalty. The other two goals were scored by Julian Alvarez.

Croatia played defensively against Brazil. But Croatia played attacking football against Argentina. That’s where Croatia went wrong. In the first 30 minutes, they kept possession of the ball more, and created more chances to score, but could not score a single goal.

Although on the other hand, the first 30 minutes were slightly behind, Argentina changed the game in the last 15 minutes of the first half. Messi went ahead with a pair of goals. Croatia could not return from there.

Messi played the best football semi-final of the World Cup this time. From attack to defense, Messi was on point. Argentina kept their record intact in the World Cup. They played in six semi-finals and won six times.

Messi, like other teams, was kept in zonal marking by Croatia. As soon as he caught the ball, three to four footballers were running. But even after that, they could not hold Messi for long. One of the reasons could be the pressure of playing matches against Brazil.

Modric was chasing when Messi had the ball at his feet. As a result, Argentina could not keep more possession of the ball. Croatia was attacking using both ends. But Argentina’s defense was alerted. As a result, Croatia could not score a single goal.

After 33 minutes, Argentina went ahead against the pace of the game. Croatia goalkeeper Livakovic fouled Álvarez in the box. The referee gave a penalty. Messi did not make a mistake to score from the spot. He wrapped it into the net from the left side of the goalkeeper.

Messi scored his fifth goal in the World Cup this time. Along with that, he became the highest scorer for Argentina by scoring 11 goals in this World Cup.

After 80 minutes, Modric was picked up by coach Dalic. He had to return empty-handed from his last World Cup. Last time he went to the final and lost. This time the fight ended in the semi-finals. The rest of the time Croatia could not repay the goal despite many efforts. Messi’s boys went to the final after winning 3-0.