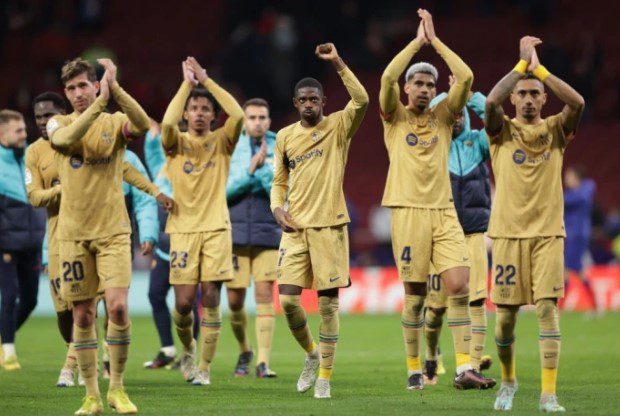 Atlético Madrid vs Barcelona: Real Madrid lost to Villarreal earlier in the day. Taking advantage of the opportunity, Barcelona has risen to the top of the La Liga points table by 3 points after beating Atletico Madrid. Barcelona beat Atletico Madrid 1-0 at the Metropolitano Stadium last night. Ousmane Dembele scored the only goal for the team.

Barcelona didn’t start well after the World Cup break. A draw with Espanyol in the first match in the league, followed by a last-minute win against third-tier side Intercity in the Copa del Rey.

Although Dembele, Pedri, and Ansu Fati played stunning football at the beginning of the match. Xavi includes four midfielders in this match as Robert Lewandowski was absent due to suspension.

By increasing the supply of the ball from the midfield, more attacking opportunities are created. with such an attack, Barcelona got a goal in 22 minutes.

In the 21st minute, Pedri took the ball past some of the Atletico defense and entered the D box. Then raise the ball toward Gavi. He sends the ball to Dembele and Dembele put the ball into the net from the far post.

After conceding the first goal, however, Atletico began to turn around. Jose Maria and Jimenez’s header narrowly missed the target late in the first half. Earlier, Antoine Griezmann’s strong shot was blocked by Barcelona goalkeeper Marc-André ter Stegen in exchange for a corner.

Dembele had two good chances after the break. However, the French forward couldn’t use any of them. Ferran Torres was offside once he sent the ball into the net. However, Atlético had chances to equalize throughout the second half. In the 87th minute, if Ter Stegen did not stop Griezmann’s shot, Griezmann was almost gotten the goal.

Barcelona’s Torres and Atletico’s Stefan Savic were red-carded for fighting in added time. However, neither could take advantage as both teams lost 1 player from the team. Barcelona left the field with 3 points after keeping their score intact.

Barcelona tops the league with 41 points after 16 matches. Real Madrid holds the 2nd position with 38 points. Atlético is in fifth position with 27 points. Respectively Sociedad and Real Betis are third (32 points) and fourth (28 points).