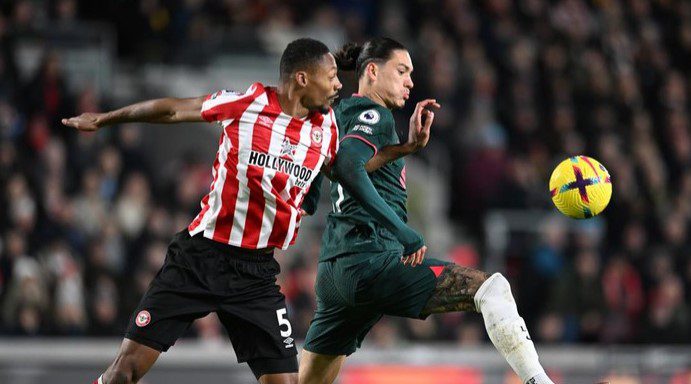 Brentford vs Liverpool: Liverpool ended the year 2022 fairly well. Liverpool returned to the battle for the top four after winning four consecutive matches in the English Premier League. However, Jurgen Klopp’s team was defeated by Brentford in their first match in 2023.

And Brentford strengthened their dream of being in the top four with their great win 3-1 against Liverpool.

Liverpool got a great chance in just 8 minutes of the match. Mohamed Salah delivers a great through ball to Darwin Nunez. Nunez took a great shot past the goalkeeper and into the empty net, but Ben Mee ran and blocked the shot from the goal line to keep Brentford in the match.

Brentford had their first chance ten minutes later. But Bryan Mbeumo couldn’t keep his head on target from a dangerous spot.

Coming in the 19th minute, Yoane Wissa gave a great ball to Bryan Mbeumo through two defenders of Liverpool. Virgil van Dijk left him ahead. But Alisson Becker came forward and blocked his shot for a corner. And the ball came from that corner and hit the feet of Liverpool defender Ibrahima Konaté and went into the net.

Konstantinos Tsimikas had a great opportunity to equalize after five minutes. But before he could take his shot, Brentford’s goalkeeper pounced and grabbed the ball.

After three minutes, Yoane Wissa shot the ball into the net from the corner. However, he was offside so the goal was dismissed. However, Brentford did not have to wait long for the second goal. In the 39th minute, Brentford sent the ball into Liverpool’s net again from another corner.

Trailing by two goals, Liverpool made three changes at the start of the second half. And Darwin Nunez found the net in the 48th minute with a great offensive start, but the goal was dismissed as he was offside.

After that, Liverpool began to create attacking opportunities for several periods. The chance came in the 80th minute. Ibrahima Konate curled his header wide of the far post from the corner. However, Liverpool fell behind by two goals after missing the chance to equalize the score.

In the 84th minute, Konate went first to the ball aimed at Mbeumo from midfield. He moved forward a little with his head. However, Mbeumo hit him hard from behind, hitting the defender’s leg. Fall into the corner.

Mbeumo then went forward alone with the ball and put the ball into the net. And that’s what made Brentford win 3-1 against Liverpool.

This is Brentford’s 6th win in 18 matches in the Premier League, Brentford is breathing down Liverpool’s neck with 26 points after 4 losses and 8 draws. Liverpool is just above them with 28 points from 17 matches with 8 wins, 4 draws, and 5 losses.