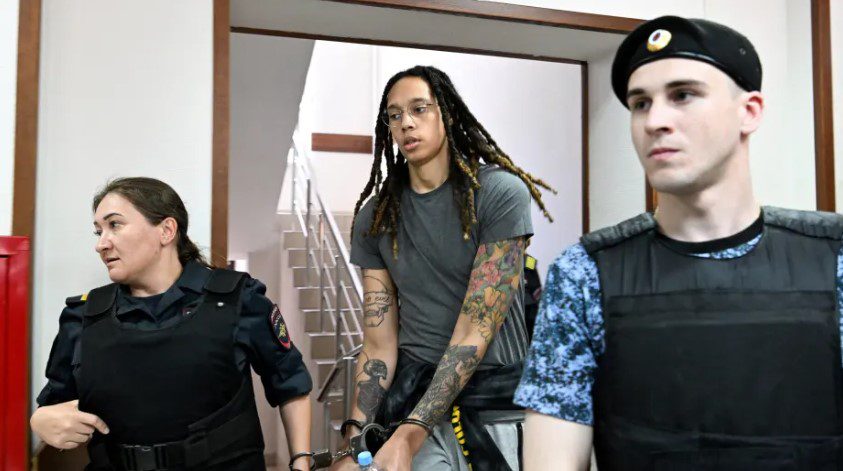 Thursday Morning U.S. President Joe Biden confirmed that Brittney Griner the star player of United States basketball player has been released in a prison exchange from the custody of Russia. In a press conference Thursday morning Joe Biden said that he had a phone call with Brittney Griner and she is in good spirits.

Joe Biden said, “She’s relieved to finally be heading home, and the fact remains that she’s lost months of her life, experienced needless trauma, she endured mistreatment and a show trial in Russia with characteristic grit and incredible dignity”.

On February 17, 2022, Brittney Griner was arrested by customs officials in the Russian airport in Moscow for carrying vape cartridges that contained oil derived from cannabis in her luggage. For illegal drug smuggling allegations, Brittney Griner was sentenced to 9 years in Russian prison.

The White House called this incident a shame. Brittney Griner feels guilty for this and apologizes to the nation by calling the incident an “honest mistake”.

From 2009 to 2013 Brittney Griner was a superstar of the Baylor Bears women’s basketball team. From 2013 She was playing for the Phoenix Mercury team, also during off-seasons, she played in Russia and China.

Brittney Griner is released in exchange for a Russian prisoner Viktor Bout who was a Russian arms dealer, who is called “the Merchant of Death”.

Brittney’s wife was also presented with Joe Biden in the press conference when the news was published.

detainment said, “Over the last nine months, you all have been so privy to one of the darkest moments of my life, Today I’m just standing here, overwhelmed with emotions. But the most important emotion that I have right now is just sincere gratitude for President Biden and his entire administration”.

Biden also reviled that he was engaged in intense efforts from the beginning of the detainment just to release Brittney Griner as soon as possible.

Turner said, “Even in a time of major conflict between Russia and the United States, positive things can and do still occur, Tremendous thanks to President Biden, Congresswoman Sheila Jackson Lee, and many others who worked tirelessly to bring Brittney home”.