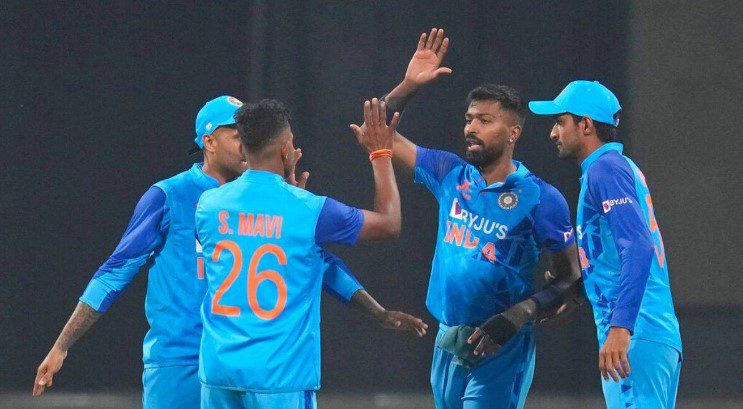 A perfect start to the new year. India started the t20 series by winning the 1st t20 match under the leadership of Hardik Pandya. India beat Sri Lanka by 2 runs in the first IND vs SL T20 match at Wankhede. Rohit Sharma is out due to injury, Lokesh Rahul is out, and Virat Kohli is on rest.

Apart from batting, a bunch of seniors Bowlers is also resting. But team India didn’t let that absence be felt in that match.

Despite stumbling in the beginning, the Indian team turned around quickly. India took a 1-0 lead in the three-match series.

This is a completely new team. Hardik Pandya led the national team for the first time at home. The pair made their debut for the Indian team in T20 Internationals. Shivam Mavi got a chance as Arshdeep Singh is injured. Similarly, Shubman Gill got the opportunity to play the first international match in the T20 format.

India lost the toss and batted first. Shubman did not get big innings despite hitting a boundary. Spinner Maheesh Theekshana attacked in the third over and took the wicket of Shubman (7).

The situation gets more worse when Suryakumar Yadav also returned in the last over of the power play, he also scored 7 runs. And the score was 38 runs for the loss of 2 wickets.

In the seventh over, Sanju Samson was caught out by offspinner Dhananjay de Silva while trying to play a big hit over the leg side. He had great opportunities to prove his skill in the absence of seniors, but he lost the chance.

Next on the 11th over Hasaranga to Kishan. Ishan Kishan caught out on the boundary line while trying to hit a 6. In the 15th over Hardik Pandya lost his wicket and India was 94-5.

Indian batting was under pressure after losing 5 wickets for just 94 runs. From there, India made a decent score of 162 runs.

Additional credit should be given to Akshar Patel and Deepak Hooda duo. Akshar-Deepak’s unbroken 68 runs put the Indian innings in a fighting position.

The Indian bowlers kept control of the match by dropping 5 wickets to Sri Lanka for just 68 runs. However, in the end, Sri Lankan captain Dasun Shanaka’s innings of 45 runs from just 27 balls brought them back into the match.

Chamika Karunaratne remained unbeaten on 23 off 16 balls. Akshar brought victory to India after handling the pressure of nerves by defending 13 runs in the last over.