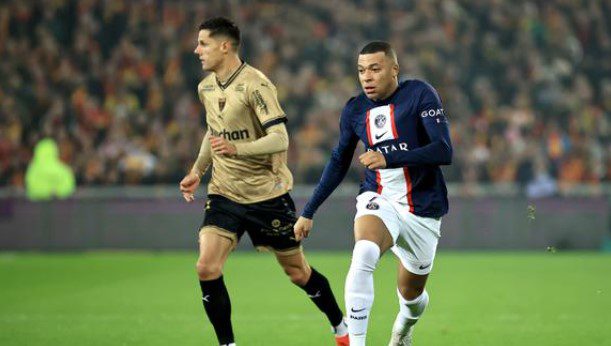 Lens vs PSG: The young superstar Kylian Mbappe couldn’t do it without the likes of Lionel Messi and Neymar. As a result, Paris Saint Germain (PSG) had to accept their first defeat of the season in the French League-1.

PSG, who are on top of the league, were defeated 1-3 by second-placed Lens in the points table. Messi is still in his country Argentina after winning the World Cup.

At the same time, Neymar was shown a red card in the last match against Strasbourg, due to which he did not play in this match. This was the reason why PSG had to go into this match relying on Mbappe alone.

Lens took the lead in the fifth minute. With this PSG defeat, their lead in League 1 has now been reduced to just four points. Earlier, PSG had a seven-point lead over Lens. PSG has 44 points from 17 matches.

Just 5 minutes into the match James Frankowski gave Lens the lead. PSG was not prepared for such a situation. Even after scoring so fast, he tries to stand up.

PSG striker Hugo Ekitiké equalized the score for PSG within three minutes of Lens’ goal. His goal brought temporary relief to the team.

Lanes went ahead again in the first half. Lois Openda scored this time. Lanes regained confidence at home as they took a 2-1 lead.

Alexis Claude Maurice increased the goal for Lens at the beginning of the second half. His goal in the 47th minute put Lens 3-1 up and PSG practically gave up. The first loss of the season PSG left the field with disappointment.

PSG management has decided to give rest to Mbappe and Moroccan Achraf Hakimi to get rid of World Cup fatigue after this defeat. Mbappe joined a PSG training session on 18 December, within 64 hours of playing the World Cup final.

He also played against Strasbourg and scored the winning goal for the team. Achraf Hakimi also played seven matches for Morocco. PSG manager Christophe Galtier said after the match that both footballers are not yet fully fit to play. Fatigue dominates them. He will be given rest for a few days.