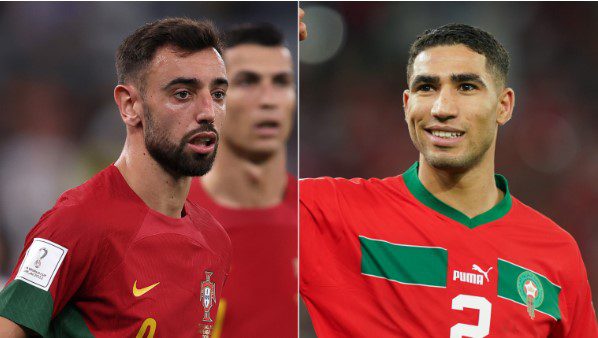 Portugal vs Morocco quarterfinal match will begin a few hours later. In the FIFA world cup 2018, Portugal was eliminated from the Round of 16 match against Uruguay, though the group stage match against Morocco was pretty tough.

Santos the manager of the Portugal national team said, “We won 1-0 but we had to suffer a lot to win that match, My players know that”.

As for Morocco, this is the only team outside of Europe/ South America that qualified for the quarter-final in this 2022 FIFA world cup. The last match penalty-shootout win against Spain in the round of 16, sparks the energy of the fans of Morocco.

Morocco conceded only one goal against Canada otherwise the team has proven their place in this world cup. Although 3 major players of Morocco are struggling for their fitness to play against Portugal. Sofyan Amrabat said that he was suffering from a back injury and he played the round of 16 match against Spain by taking pain killer injection.

Here Morocco captain Romain Saiss has an injury in his leg and played the match against Spain with bandaged up, and Romain Saiss hobbled off in tears for his thigh injury.

For Portugal, they don’t have such kind of problems, team Santosh has such a depth of players that it gives him the confidence to take the decision to drop players like legend Ronaldo, Joao Cancelo, and Ruben Neves with ease from group stage games to the round of 16.

Talking about Ronaldo, there are so many dramas constantly surrounding him, who is playing probably his last world cup, we can expect to see him in the field of this match.

Portugal vs Morocco FIFA World cup match will be played on 10th December from 08.30 Pm onward in the Al Thumamma Stadium.

Portugal vs Morocco quarter-final will be broadcast live on sports 18 and the Jio cinema app. You can watch the live broadcast of the match.