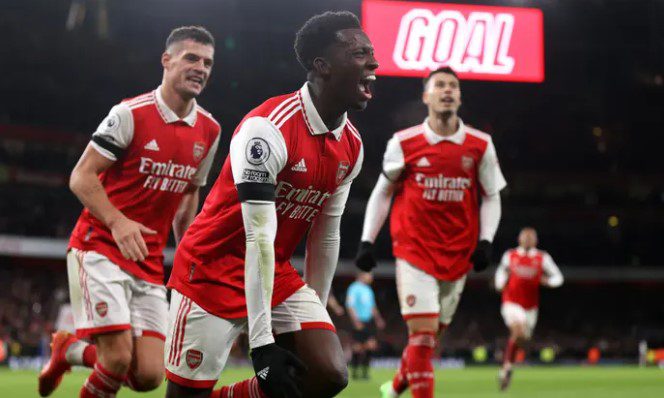 This year the World Cup is held in November and December. When the footballers are busy playing club football. The World Cup was organized this time by stopping Premier League. Many clubs feared that the team’s rhythm might be lost after the World Cup.

Arsenal made it clear in the English Premier League on Monday night that the World Cup break has not affected their squad. Arsenal won the match 3-1 after initially going behind against West Ham.

Gabriel Jesus was injured in the middle of the World Cup, so Arsenal played without him. However, that did not stop Arsenal from winning. West Ham got a penalty after 27 minutes. From there, Said Benrahma led the team with a goal.

Arsenal was trailing 0-1 at the end of the first half. However, In the second half, Bukayo Saka ended West Ham’s hopes by scoring 3 goals in 16 minutes. Saka scored after 53 minutes. Gabriel Martinelli increased the gap after 5 minutes.

Eddie Nketiah scored in the 69th minute. Arsenal, however, had the ball in the net within 5 minutes of the game. Although the goal of Saka was disallowed. Arsenal remained at the top of the league with 40 points in 15 matches after winning the match.

In the other match, Aston Villa lost 3-1 to Liverpool at home. Mohamed Salah gave Liverpool the lead into the match by scoring within five minutes. Virgil van Dijk scored in the 37th minute. Aston Villa’s Ollie Watkins scored 1 goal in 59 minutes. Stefan Bajčetić made it 3-1 in the 81st minute.

Tottenham has to be content with a draw. Their manager Antonio Conte said after the match on Monday that his team did not play good football in the first half. He expressed anger at the start of the league a week after the end of the World Cup.

Conte said, “Maybe, my team could not hold the match because they played after a long break. But I will say again, the decision to start the EPL again after the World Cup is not a great decision at all”.

Arsenal is at the top of the league; Newcastle is in second place. They beat Leicester City 3-0. After playing 16 matches, Newcastle collected 33 points. Manchester City is in third place. They collected 32 points in 14 matches. They have a match against Leeds United on Thursday.

Tottenham has collected 30 points in 16 matches, they are in fourth place. Manchester United is in fifth place, they collected 26 points in 14 matches. They will play against Nottingham Forest on Tuesday night.