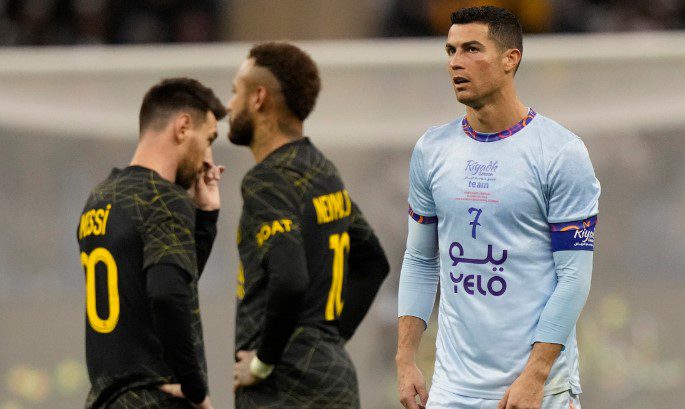 PSG vs Riyadh All Stars XI: The two superstars of world football, Lionel Messi and Cristiano Ronaldo, met in a friendly match in Riyadh on Thursday. The whole world witnessed the fierce fight between two arch-rivals in Saudi Arabia. After a long time, football lovers got a chance to watch the fight between these two arch-rivals.

PSG won 5-4 on Thursday in a friendly match against Riyadh All Stars XI, a team made up of players from two Saudi Arabian clubs, Al Nasr and Al Hilal. A total of 9 goals were scored in this tight match. The Paris team played with 10 players for a long time at the King Fahd International Stadium in Riyadh.

Messi, Kylian Mbappe, Sergio Ramos, Marquinhos, and Hugo Ekitike scored one goal each for PSG. Neymar lost the chance to get his name on the scoresheet by missing the penalty.

Bollywood legend Amitabh Bachchan was seen on the field with PSG chairman Nasser Al-Khelaifi before the match.

PSG took the lead in the third minute of the match which started in a festive atmosphere. After receiving Neymar’s great pass in the box, Messi beat the advancing goalkeeper with a left-footed shot.

Ronaldo got the first chance in the sixth minute. Goalkeeper Keylor Navas saved the Portuguese superstar’s left-footed shot from outside the box.

In the 25th minute, Mbappe caught Messi’s great pass and sent the ball into the net, but the goal was missed due to offside.

Ronaldo equalized the score with a successful spot-kick in the 34th minute in a penalty. PSG got into trouble in the 39th minute. Spanish defender Bernat was shown a straight red card for a foul on All-Stars midfielder Salim Al-Dawsari near midfield.

The French champions recovered the lead three minutes later. Mbappe’s cross from the left, received in the six-yard box, was flicked into the net by Marquinhos. Ronaldo equalized the score again with his second goal in added time of the first half.

In the next minute, Mbappe-Ramos went ahead again. The Spanish defender picked up a pass from the French star and sent the ball into the net with his right foot in the six-yard box.

That relief didn’t last long though. In the 56th minute, South Korean defender Soo Jang headed in a corner to tie the game 3-3.

After three minutes, PSG went ahead again. Mbappe scored the goal from the spot kick. Messi’s shot hit Ali Albulayhi’s hand in the box, the referee gave a penalty.

In the 78th minute, Ekitike who replaced instead of Mbappe made the scoreline 5-3. And in the added time of the second half, Brazilian midfielder Anderson Talisca scored with a shot from outside the box. In the end, PSG won 5-4.