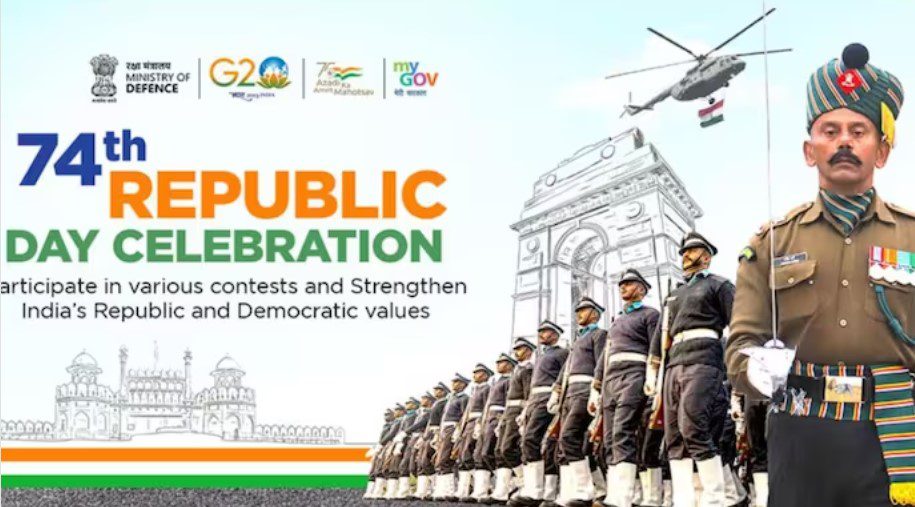 On the occasion of the 74th Republic Day parade, 45 aircraft of the Indian Air Force, one of the Indian Navy and four helicopters of the Indian Army performed amazing stunts in the sky. During this, the world also saw the power of Rafale jets.

The daredevils enthralled us with their performance on the Kartavya path. On the bike, Daredevils showed amazing stunts. During this, he was seen doing yoga postures on the bike.

In the Republic Day Parade was based on ‘Tourism and Organic Farming with the active participation of women’. The Mahamuni Buddha temple was also shown in the tableau.

Emphasis on Green Energy in Gujarat:

On Republic Day, Gujarat’s tableau was based on the theme ‘Clean-Green Energy Efficient Gujarat’. This tableau illustrates renewable energy sources.

Agniveer Participated in the Parade:

Agniveer participated in the Republic Day parade for the first time. A naval contingent of 144 young sailors marched on duty under the leadership of Lt Commander Disha Amrita. At that time, 3 women and 6 men Agniveer were included in the army.

At the Republic Day parade, BSF’s royal camels enthrall the audience. India has the only camel squad in the world.

BrahMos Missile Showed its Power to the World:

BrahMos of the 861 Missile Regiment was also included in the Republic Day parade. Under the leadership of Lieutenant Prajwal Kala, the world saw the power of this missile system of India.

The K9-Vajra-T (Self-Propelled) Gun System also showed its might in the Duty Day parade. The detachment of Quick Reaction Fighting Vehicle, led by Captain Naveen Dhatarwal of the 3-Ladakh Scouts Regiment, marches down the Kartavya path. The vehicle is ideally built for troops operating in Ladakh, Sikkim, and Arunachal Pradesh.